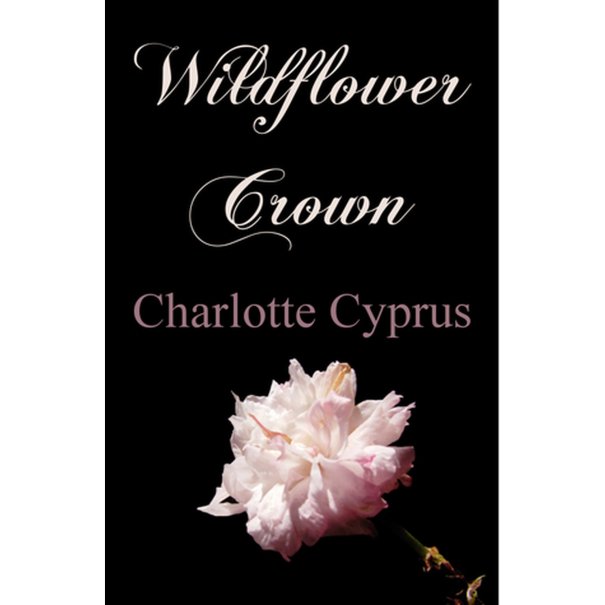 After reviewing the novel, “Red Queen,” by Victoria Aveyard I got a message from author Charlotte Cyprus asking me to review her book. After reading and reflecting upon the book I am happy to announce my official review on the fantasy book, “Wildflower Crown.” Charlotte Cyprus or Bethany writes romance novels and likes fantasy as well. “Wildflower Crown” is self-published and is available at Amazon.com. She has also written the book, “Kiss of the Fey,” and while I haven’t read it, the description peaks my interest. You can read that description and learn more about the author at her blog.

“Wildflower Crown” tell the story of a girl who is given away to a lady in town when she is a baby. As the story goes on, it is revealed that Wild whose full name is Wysandra is blamed for killing a boy just by touching him so she runs away and takes refuge in a cave with her dog Flower. She lives in this cave until a wounded man comes to her for help. She heals him faster than humanely possible and he offers her the option to come with him in return for healing him. At first Wild turns him down on his offer, however after realizing how much she missed having human interaction she decides to go after him.

Towards the end of the book, it is revealed to the betrothed that Wild is acting as the princess so Daivat and Wild end up having to leave the kingdom in order to survive and be together. I won’t reveal the ending, but it gets kind of crazy. 🙂

“Wildflower Crown” is a good read. It honestly would not have been something I would have just chosen to read, however I enjoyed it and read through it in a week which sounds long, but for a person who is a slow reader like me, that is pretty fast. 🙂 The theme that I seemed to notice throughout the story was the idea of second chances, such as Wild going back into civilization again even though she ran away from her home after she killed the boy. Or when Daivat slowly allowed himself to like Wild and eventually love her even though he had his heart broken by a girl before Wild.

I will give a disclaimer that the story does have some adult content so if you are not into that, it might not be up your alley. I did not mind it, just because it makes sense that when a guy and girl have feelings for each other, they are bound to show it physically as well. But if you aren’t into that, you may want to skip a few sections or just pass on reading the book.

My favorite character in the story is Daivat’s mother, Ginger. The reason I like her so much is she seems very sweet to both her son and Wild. Also she can fluster her son very easily and it made me smile every time. Plus she gets to take care of Flower (the dog) and that would have been fun. Overall she just seems like a caring, warm-hearted woman who knows how to not take herself or others too seriously.

Personally, I would recommend this book to people who are interested in the fantasy/romance genre of books, or those who enjoy reading self-published novels and supporting those authors.

Next weekend, I will be writing a sequel to my writing prompt, which you can read here. Until then, have a great week and enjoy the last few days of July!